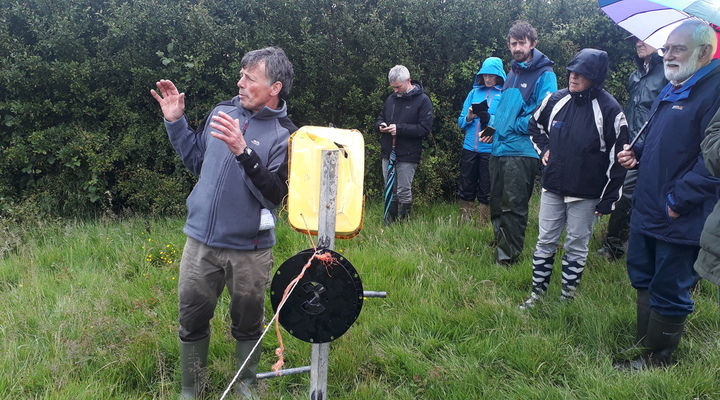 Dodging heavy rain was the order of the day on the first day of the PFLA’s 2019 tour. Thirty members and guests met at Lomas Farm near Cranbrook in Kent, home to David and Jane Cornforth and family.

After a delicious BBQ of Limousin x Hereford burgers, David gave the group the history of his move from dairy farming in Yorkshire, via New Zealand, to farming beef cattle on a 50 hectare old ADAS dairy site.

There are 50 suckler cows plus calves and yearlings – total numbers between 115 and 140 at any one time.  They are a real mixture of breeds from South East dairy farms and as a result tend to be 50% dairy/beef which helps get calves off to a great start.

The farm is all grassland. 30% was reseeded around six years ago with ryegrass clover leys. Fields are subdivided into lanes 50 to 70m wide to enable grazing cells to be quickly erected.

Over the last 10 years grazing has moved from rotational grazing to ultra high density mob grazing with up to five moves a day depending on grass growth and with the help of solar powered gate releases – Batt Latches.

This has also resulted in cutting the fertiliser, wormer, spray and lime bills to zero and winter housing down to an average of 75 days. Vet visits are rare.

Soil health is very important to David and a good worm count showed he is doing a great job.  His stocking rate is increasing 6% per year.

Later the same day, it was Burgham Farm’s turn to host a walk. Just outside Etchingham in Kent, Sam Newington took over running the farm three years ago. He was very honest and shared with the group that he still feeds some grain but is slowly moving over to pasture-fed.  He is selling 150-200 organic fat animals per year. 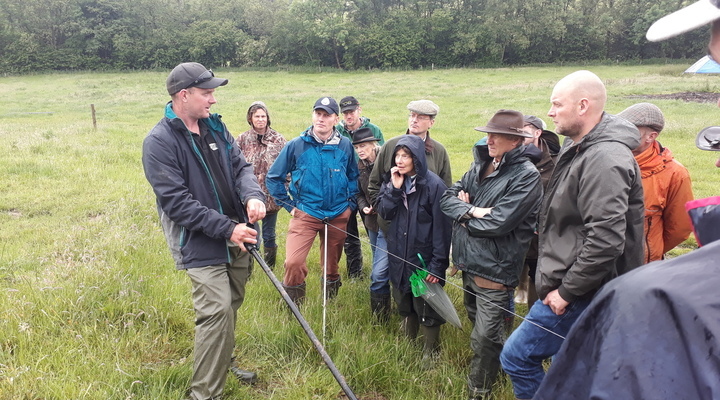 After some bad luck with grazing systems, Sam’s new plan is to use semi-permanent mains electric fencing system and a platemeter to monitor average farm cover. This year he is participating in GrassCheck GB https://grasscheckgb.co.uk/ to share grass growth, cattle weights and forage analysis data.

The Newingtons own 89ha of grassland and rent 70ha. From this they manage one cut of silage made in mid to late May with hay and bale silage made with excess grass.

They are very keen to prove to the wider farming community that mob grazing is profitable and sustainable. The group toured the farm’s grazing platform and discussed utilisation rates and residuals on the grazing rotation.  The farm makes use of various simple equipment to make grazing easy and fencing and water systems were discussed in detail.

Day 1 concluded with a dinner of slow roasted Pasture for Life hogget in a 16th century Kentish barn – a great evening sharing further information and getting to know each other.

Romshed Farm was the venue for day 2, home to PFLA Director Fidelity Weston and family.  They have farmed there since 1984, converting to organic in 2000 with the Soil Association.

Supported by Government grants through a Countryside Stewardship Scheme they have planted over a thousand metres of hedgerows so that all their small pieces of woodland are connected to each other and to the wider landscape. The farm lies in the AONB and is typical of the landscape with small well hedged fields, small belts of woodland and wildflower rich meadows.

They have a flock of 150 Lleyn ewes with 225 lambs, retaining the ewe lambs to replace old ewes.  They lamb outside and only triplet bearing ewes and those lambing for the first time are housed just before lambing.

There are 20 Hereford cows and a bull, with calving in the spring and keeping all offspring to sell as meat from the farm at about 30 months. Only the cows and pregnant heifers are housed during winter with youngstock kept on the drier greensand ridge unless it gets too wet.

“Through our membership of the PFLA we have been inspired to actively look at new ways of managing our pastures.  In particular how we can regularly move our stock, allowing the pastures time to rest and grow back.  This encourages deeper rooting plants with more growth and diversity, which is good for the stock and the soil and ultimately contributes to carbon sequestration.”

Having seen three different styles of mob grazing the group discussed the different objectives and constraints for running such a system.  For Fidelity’s farm the objective is about building value for the wider environment, for Sam’s it is low costs of production and for David prioritising the rebuilding of soil health at minimal cost.  These were useful reflections for everyone in the group considering their own objectives and management style.

In the final wrap up discussion everyone shared what they will now go home and do differently as a result of the study tour experience.  There were some great commitments ranging from getting started with rotational grazing and establishing new supply chains for pasture-fed produce.  Everyone was keen to help each other achieve their goals and looked forward to hearing how each other got on with any lessons learned along the way.

View all articles for farmers